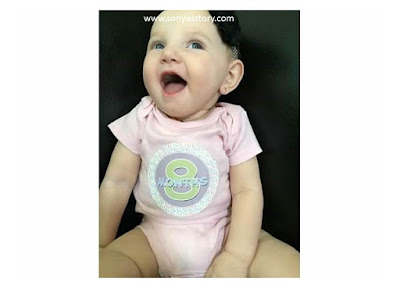 The first thing that I do when I see this picture is smile.  My beautiful blue-eyed eight-month-old daughter is smiling with the biggest grin on her face.  For a split second I do not think about anything negative and I enjoy the feeling that is circulating through me.  The smile alone in this picture helps me to “ignore” the steps that it took to lead up to this fantastic pose.  You see, this picture is staged.  The amount of strength, perseverance, and time it took to make this moment possible is unclear with just a simple glance.

Yes, I staged my 8 month old’s “monthly birth day” picture on the corner of the black couch in the living room.  I originally attempted to do the photo shoot on the rocking chair in our master bedroom but failed miserably.  What you do not see in this picture is that our eight month old cannot support her own body in a seated position.  Due to the height of the armrest and the location where it joins the back of the rocking chair, her body was not sufficiently supported.  This resulted in her head falling backward, and she was quite displeased.  I then tried moving her into the middle of the chair in hopes it might offer more support; that backfired on me as well due to the angle of the chair and her poor neck control, so she kept falling to the sides.  Being fearful her discomfort and dissatisfaction would prematurely end our session we relocated into the living room.

She was now placed in the corner of the black couch, which gives her enough cushioned support to hold her own body.  I whispered to her “we are almost done, just give me one smile”.  Another 14 snaps occurred before a small upward grin emerged.  What is not pictured is my other daughter and I cheering her on for all 14 attempts.  We were making silly noises, and smiling so fiercly my face began to hurt.  What is hidden from this side of the camera is me feeling frustrated and defeated (as I tend to do each month) because she just would not smile.  My husband walked into the room and I plead for his assistance.  If we had a behind the scenes camera set up, you would see a 33 year old man with a huge smile on his face, squealing to our daughter in his highest pitch possible.  Three more pictures taken and on the fourth snap, FINALLY, this gem was captured.

You might be curious as to why so much effort must go into a simple eight month old’s photo.  The reason; because what is not noticeable in this picture is my daughter’s medical alert bracelet stating she suffers from epilepsy due to a rare x-linked genetic disorder, Cyclin-Dependent Kinase-Like 5.  A disorder so rare, the community references it only by the abbreviation of the specific name of the gene, CDKL5, which describes what it does.  This gene is responsible for providing instructions for creating a protein that is essential to normal brain development.  What is not depicted is a severe developmental delay causing smiles for this beauty to come following intense physical, mental, and emotional effort from both herself and her cheer squad.  The amount of energy it takes for my baby girl to hold her head up and smile at the same time is something you nor I will ever be able to fully comprehend.  While based on my daughter's expression she is pretty pleased with her father's antics, what is not evident is how much inspiration, joy, and amazement her mother receives by one wide mouth, toothless grin, on her monthly birthday.