As of a November 13, 2015 article published, 1 in 45 children are suggested to have been diagnosed with Autism based on a new government survey of parents.  Due to the numbers coming from a parent report, the official estimate according to the U.S Center for Disease Control is 1 in 68 American children are diagnosed with an Autism Spectrum Disorder.  Most recently in the last 5 years more research has determined that the cause of Autism is both gene related and due to environmental factors.  There has been a TEN fold increase in the past 40 years, and the increase is attributed to both improved diagnosis AND awareness.

According to the ALS Association, in the summer of 2014, millions of people began discussing Amyotrophic Lateral Sclerosis by simply making a video of dumping ice cold water over their heads and nominating others to do the same or make a donation to the ALS Association.  Before the time of the "Ice bucket challenge", significantly less people knew what ALS was.  Due to the social media frenzy surrounding the ALS Ice bucket challenge, a critical effort was made possible in paving the way for "drug development guidance designed to accelerate the development of therapies to slow or stop ALS".  There is currently one FDA approved drug that "modestly slows the progression of ALS in some people".

The Susan G. Komen non-profit organization brings awareness and advocacy for the fight to end breast cancer by providing the 3-day race for the cure, selling clothing and holiday theme cards, and offering credit cards with pink ribbons so more women learn about early detection methods.  There is now a 99% 5 year relative survival rate with an early stage breast cancer.

If you ask me why I began Sonya's Story, I will tell you two answers.  My first would be simply because my mother (and Sam) told me I should do it.  It would of course be a great outlet for me and it would be a great way to document our journey.  The second answer, which is weighs more in my mind, is solely due to my desire to raise awareness for CDKL5.

Unless you have come across Sonya's Story or know one of the other approximately 1000 families impacted by CDKL5, then you are part of the billions of people that have no idea a mutation on the CDKL5 gene is even possible.  Before April 17, 2015, neither Sam, nor I, nor our family or friends had uttered these characters together.  We did not know the challenges 4 simple letters and 1 number could provide.  We did now know that we would have a child living with an incurable disorder.  We did not have a cause.

While donations are amazing because they pave the way to a potential cure, what is even more important is getting the accronym "CDKL5" to roll off your tongue fluently.  It is sharing the symptoms so others who have undiagnosed children experiencing seizures paired with developmental delays and other hallmark signs might be able to get their answer.  It is teaching professionals about a disorder so they do not tell parents "babies do weird things" when there is something more serious going on.

Why do I feel it is important we raise awareness for CDKL5?  The more people who know about the disorder the more attention it receives, the more it is talked about, and the more I feel like I am actually doing something that could benefit Sonya. 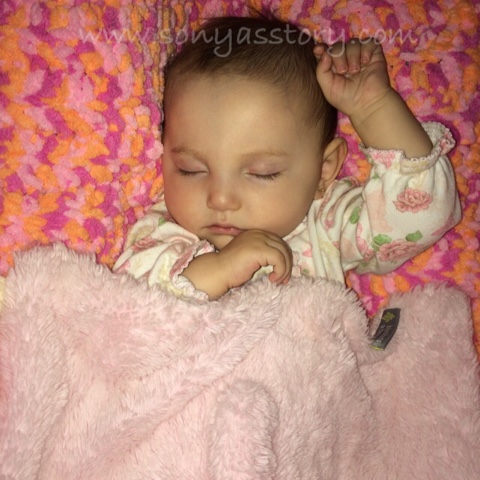