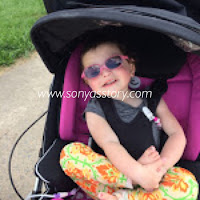 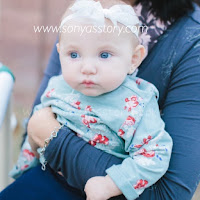 Sonya is one of those children that people refer to as "beautiful".  Not just as a conversational filler, or to make me, the mom feel better, but because she is legitimately a beautiful child.  She has been special from the start.  Wanted very much by her parents to add to their already crazy house of three active, silly siblings ranging from 4 to 7.5 years old.  Sonya came quickly into this world, a little less than 2 weeks prior to her due date and was ready to take her place, letting us know she would not just be an ordinary 4th child, but that she has a story to tell.

Sonya spent a week in the NICU following her delivery due to her mother being concerned over her breathing.  Multiple tests were run including blood work which returned with an elevated white blood count, a lumbar puncture was done to rule out meningitis.  She was treated with a broad spectrum antibiotic since no specific infection was ever identified.  During her stay in the NICU and the following 3 weeks at home, her mother noticed her feet would have tiny twitches.  Her eye contact was unlike her siblings and her mother had a sneaking suspicion something wasn't right.

When Sonya was 4 weeks old she was being nursed and her entire body shook against her mother.  Her mother reached out to some medical professionals who assured her that she was probably just experiencing myoclonic jerks, but that it was probably nothing serious.  48 hours later it happened again and so it was recorded and Sonya was taken to the children's hospital.

Multiple blood work later, another 3 lumbar punctures, MRI, CT scan, and various other tests it was determined that things were normal.  While we were inpatient we were asked if we wanted to do a longer stay in the pediatric epilepsy monitoring unit (PEMU), which we gladly said yes to.  Once she was hooked up to the monitoring equipment it was clear that Sonya was experiencing seizures and she was diagnosed with epilepsy.

Genetic testing was completed via blood work and saliva swabs and sent away to determine if there would be a cause to her seizures.  Just a few weeks later we received the call that indeed, our little girl had a cause.  She had a frameshift mutation on her CDKL5 gene which would result in early onset seizures and severe to profound developmental delays.

This is where Sonya's Story begins...
Sadly on February 3, 2020, after 4 years 11 months and 22 days, our beloved Sonzee bear died peacefully at home.