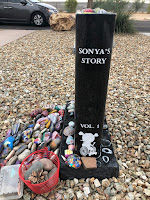 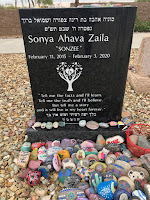 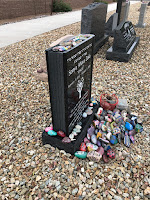 The last time I wrote you a letter and read it aloud to you here it was 47 weeks 1 day and between 18-20 hours ago.  A lot has happened since that day and yet nothing at all.  Time has both flown by and stood solidly still.  I might have broken some unspoken religious rules by visiting you as often as I have over the last 46 weeks, but in the beginning, it was a way to make sure I was still physically taking care of you and since then the emotions and reasoning behind my visits have constantly morphed.  To be honest, in the beginning, it was a little “easier” and then the further the “last time I saw you” got, the more difficult it has been.  In October I started to be filled with a mixture of excitement and utter panic over the potential delivery of your monument.  It wasn’t until I found myself in the office nonchalantly asking if anyone knew when it would be arriving and finding out it was coming “tomorrow” that I realized the panic was really a mixture of panic, pain, sadness, finality or rather reality.

The chief purpose of dedicating a headstone is to mark the final resting place of a loved one to honor his or her life and to serve as a focal point for people’s memories.  Well my little girl, I hope and pray that this monument has honored your life to the fullest.  We chose a book, because well it was just obvious. Volume one, which is represented here, officially started on February 11, 2015 and ended on February 3, 2020.  Your 4 years 11 months and 22 days were filled with more than these granite markings could ever share, but the essence can be found on the cover, in the stone pages, and when delivered within the yahrtzeit stone and bench.  You will always be Sonya Ahava the daughter of Shmuel Baruch and Reena Tzipporah.  You are more famously known as “Sonzee” and as the yahrtzeit candle plaque will also state, Chooper and Sonzee Bear; we also included a bear and your mermie etched by your names to make sure we captured all of your aliases.  The bench that will be placed at the front will honor the impact that the Foundation for Blind Children had on your favorite song, Hooray for Sonzee with a set of pompoms and when I eventually sit here rereading all the words in front of me, I will undoubtedly start to sing (maybe I will even bring the gold pompom and embarrass both of us?!).

Your names mean wisdom and love, which are perfectly depicted with a tree surrounded with hearts.

Aba and I had the most difficult time finding the right Sonzee quotes.  The one in English

In June of 2015 Rabbi Oirechman and Chanie sent us a book, “Dignified Differences”, which included motivational and religious quotes paired with stories about children with special needs.  The inspiration of the book was about a little girl named Zlata Esther, aka Zlatie who was diagnosed with Autism.  I read the book in 2015 and put it above my desk.  When it came time to find a Hebrew quote because aba really wanted one, an image from the book popped into my mind, it was Zlatie’s tomb.  The inscription was from song of songs (4) and when aba and I read it we knew well one of the reasons we were gifted this book years before.

כלך יפה רעיתי ומום אין בך Which translates into "My beloved, you are entirely beautiful, and there is no blemish in you."

While this monument is a horrible consolation for your absence, we are confident that anyone walking these rows who stops to read about you will have a small glimpse into the special little girl you were and always will be.  They won’t know about your sassy and at times ornery behavior, but they will know that your 4 years 11 months and 22 days were spent fulfilling such an incredible purpose that it didn’t require the average life time to accomplish.  They might not understand that you completed your mission without ever saying a word or without ever taking your first steps, but they will know you were absolutely perfect and maybe one day I will be okay with the understanding that you were as special as you were that we had to give you back, but until then and probably even after, you’ll find me here, arranging your rocks and eventually sitting on your bench singing “hooray for Sonzee”.