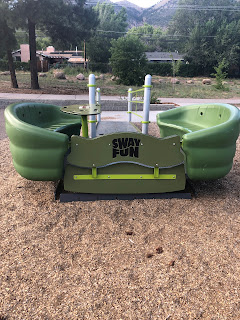 Since we have closed on Bear Pines we have been in Flagstaff more than Phoenix.  I mean when you compare 118-degree highs to 85 it really isn't that difficult to make the choice.  Despite my working virtually, the kids do not go back to school for at least another 10 days, so it has been nice to have a change of scenery.  We typically stay in the neighborhood where the house is, they have a small park and some wildlife areas, but the kids beg us to go to a park about 18 minutes away because it has a skateboard area with ramps as well as a huge climbing structure and zip line swings.  We have obliged twice.  The first time I hung with Sonzee's little brother in the little kid play area, he tends to just climb up and down steps 1000 times and never slide down the actual slide.  The second time, we all went to the area that had the "fun" activities, and the little man managed to still find a smaller slide with 5 steps to continue his routine (it should be noted he FINALLY slid down).  It was within 1 minute of stepping onto the mulch that this "sway fun" came into view.
My initial reaction was to be excited, I mean it isn't very often that a park has anything that can even be confused with maybe being "accessible" and here this was staring me in the face.  I also noted that one of the ziplines was a seat with a top harness bar contraption, so that too could house a differently-abled child (but not Sonzee).  Noting the ramp, I immediately said, "oh wow, something for Sonzee".  The kids ran up to it and I actually told them to get off because it wasn't meant for them, it was meant for Sonzee or a child who was in a wheelchair.  I don't know why, but something about them being on it when she wasn't there to be with them made me say it.  I could envision her and I just chilling in there while her siblings ran all around, in fact just staring at it I could see her bright pink wheelchair facing out to ensure her view wouldn't be blocked by the structure itself.  I could see her sitting with her leg crossed over and her playing with her hands and pushing her pacifier out of her mouth, but then reality snapped me back.
She isn't here, and if she were, we wouldn't be in Flagstaff, none of this would be happening, and so it seems I am just left with a dream. A dream where it all could be possible, whatever that even means.  Instead, I sat at the park with my two boys and two girls and to any of the other families sitting around on their chairs smiling at Sam racing the kids we were just a perfect family out at the park.  Maybe they even wondered or thought about how we must have waited between our middle daughter and having our youngest son because clearly there is different age gap than with the older kids.  They have no idea there is and always will be a missing piece to the perceived perfection.  They have no idea that me not being able to take my eyes off of the Sway Fun had nothing to do with them sitting inside it, but rather the little girl who wasn't.