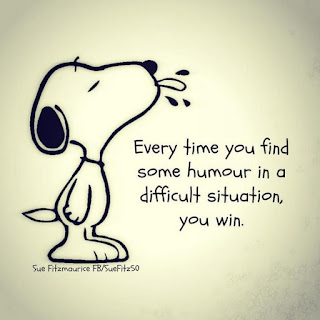 When someone I know is upset, my initial reaction is to make a joke.  Humor and laughter is my coping mechanism in serious situations.  I do not like the awkward tense feeling that accompanies depressing situations, so much so that I have been known to make “funny” statements during what might be inappropriate times.  As an extreme example, similar to those times depicted in Lifetime movies where the police are investigating a serious crime and the person has the most opposite reaction to what would you would expect, yet they are actually innocent.  A more personal example would be that time my oldest daughter tripped and fell into the corner of a wall.  She hit her head in the perfect spot to get a goose egg, which started growing at a grossly inappropriate rate.  Instead of being overly concerned I grabbed an ice pack from our neighbor (it was at her house), gave her a cuddle and was laughing so hard I had tears in my eyes as I held her.  In most cases, I do secretly wonder if someone is going to call CPS on me due to my reactions (although that could also be due to my overwhelming neurotic worrying trait).  It is just so much easier for me to make light of a situation.  If I feel uncomfortable, I automatically make a sarcastic comment and/or crack a joke.

We have gotten close with many of the members of the medical team.  I like to think that it has to do with our family comedy routine.  I am pretty sure every nurse, doctor, primary care technician, etc. who comes into our room is well aware of my antics.  The majority of them understand my need to crack a joke or two and they typically join in on the fun.  I have to admit that these jokes are not “knock knock jokes”; they are typically a sarcastic statement as to what we are dealing with when it comes to Sonzee, seizures, and or CDKL5 in general.  I try to make our situation less scary by balancing the seriousness of Sonzee’s issues with the little Sonzee bear flare.  I feel like my little jabs are not only therapeutic, but they shed a little insight into my vulnerability as a mom, and how I handle things.  I think it gives the medical team and good representation of what type of person they are dealing with.

In creating a lighthearted atmosphere, we have made it possible for medical professionals to look at us as more than parents, at Sonzee as more than a patient, and Sonzee’s siblings as part of the package.  Just last Friday we had our favorite senior resident in the room while Sam and I were attempting to have a serious conversation with the Interventional Radiologist.  Simultaneously we had three rambunctious kids literally climbing the walls and furniture.  The senior resident left the room and came back 5 minutes later with three zip lock baggies each filled with a coloring book, markers, and stickers and then sat on the floor with the kids while they colored, which allowed us to finish our conversation with no distractions.
I like to think that our inability to create boundaries with professionals and invite them into our lives on a deeper level has helped to foster this type of relationship.
This most recent hospitalization has been one of the toughest experiences thus far on Sonzee’s journey with CDKL5, but in my opinion if we keep up with the laughter, with the jokes, with the sarcasm, and with a smile, we might just make it out alive.