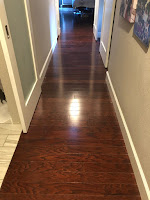 The hallway is finally empty.  It wasn't exactly planned in advance for it to happen today, but this morning I received a message saying the items could be picked up today.  It was supposed to be for TPN specific items but then I asked if I could just send everything off to which the texter happily obliged.  She "gets it", her niece passed away last year and she wanted to be as helpful as possible in easing this process.

Once all the items were loaded into her car the conversation of Sonzee's wheelchair came up and in the end, she gladly took it away as well.  I much prefer these items going off to help others who are in need, it is the closest we could get to organ donation since CDKL5 essentially ruled that possibility out.  It is a shame on many levels because that girl had one hell of a heart, but then again, without CDKL5 the consideration would most probably not even be on the table, and this blog post, as well as her entire story, wouldn't even be written.

In the end, the hallway is now empty.  The seat in the car that once held her car seat is empty.  Her ppod, stroller, and rifton sitting in our master bedroom are empty.  The spaces in this house that were once filled with so much equipment I would go insane trying to keep it organized are now representative of an even bigger void that we will have to live with.  In the end, our hallway is now empty; almost poetically to match our hearts.

"No one said this would ever be easy, my love" -Olivia Holt