They say a picture is worth a thousand words.  That was the very first thought that popped into my mind when I received the email from Shutterfly that Sonya's school pictures were ready to be viewed.  I had spent the last week in anticipation of seeing hers since her older siblings all received theirs already.  I quickly opened the email and then paused.  Or maybe it wasn't so much a pause as I got smacked so hard in the face I had to pull myself together.  Maybe it hit so hard because things are completely all over the place in our house this week?  Maybe it hit so hard because I am a firm believer in never doing retakes because whatever occurs during the picture is the reality of life in that specific moment?  Maybe it hit so hard because I initially had forgotten about what actually occurred on picture day in the first place and after a quick moment I was jarred back into reality.

I debated between this two-piece outfit and its fraternal twin whose shirt was a dark shade of greenish blue.  I had been voting on the darker shirt but was vetoed by others who felt the mustardy yellow was brighter and better suited for picture day.  I obliged.  I picked out 2 glitter ponytail bows and let nurse Paige do her thing (clearly she is always on point as evidenced in the image below). The morning of picture day I told Sonzee numerous times "your pictures are in the morning, please wait and seize after".  When I dropped her at school a little after 9am I gave her a kiss and reminded her again to just hold off until after her pictures, and then got back into the car.  Within 8 minutes I received a text that said "Ugh. For real. Pics are at 1030".  Nurse Paige mentioned they were going to try and fit her in at a different time after she woke up, and I replied: "ok, if not it's the life of Sonze".  They waited, put on a horse and pony show-pompoms and all and nurse Paige said: "she is just sort of blah". 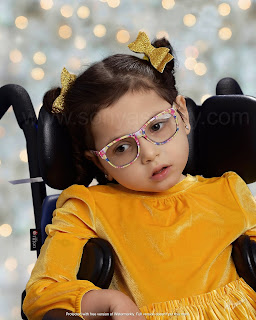