I knew when we began this journey that Sonzee wasn't going to attain developmental milestones in the same amount of time as a typical child.  I have repeated to myself daily she may never achieve some of the milestones at all...as in never.  I have learned it is one thing to say those words, it is another element entirely to live it and witness it first hand.

I have begun to coin Sonya's achievements as "Sonya-stones" and/or "Sonzee-stones".  Some of these include rolling over from front to back as well as back to front, making vocal sounds to indicate pleasure and displeasure, improving her core strength and recently, gaining much better head control.  Some of these "Sonya stones" were mastered around the same time a typical kiddo would; although we did spend countless hours working on them.  Others, such as her head control has been inconsistent and varies day to day.  In the past couple of weeks she has been holding her head up like a champ with more control.  While I am so extremely proud of this accomplishment, I am so utterly saddened that I have to celebrate it at all.  It is these such experiences that make me bitter, make want to have my "it's just not fair tantrum".  (Thank you Mrs. Bailey for teaching me in 5th grade that life is not impartial).

Really?! I am supposed to just celebrate and accept the fact that my eight month old is holding her head up well?! You mean the same skill my other kiddos mastered without even trying by the time they were 3-4 months?!  I am supposed to look at this positively and say some cliched statement such as "it is times like this that I appreciate the smaller things that I took for granted with my other kiddos...and BLAH BLAH BLAH..."

I will preface my next paragraph with I am only human and definitely no mother Teresa...

Right now I do not want to have to be celebrating this "Sonya stone".  She should be crawling and sitting and reacting to her siblings.  She should reach out to me and smile and giggle and be getting into mischief.  She should be like the majority of every other baby around her age I see popping up on my newsfeed!!!  She should be typical.

After months of waiting, (apparently they sent the results to the ordering physician and not to anyone we have appointments with) Sam and I received official word yesterday that Sonya's mutation was not inherited from either of us.  We pretty much assumed this was the case due to her specific mutation and the fact that the majority of CDKL5 mutations are de novo.  However, my first area of directed anger is towards conception and cells.  After all, the process has ONE job...make a baby...cells split and regenerate and they should do that...without mistakes.  People make mistakes, cells shouldn't.  Yes, I am aware the process is nothing less than a miracle and amazing and G-d is involved and BLAH BLAH BLAH....but "you get it right the first time"!!!!

I have trolled our CDKL5 support group and have become friends with many of the members on FaceBook.  I follow daily posts of other mothers and fathers, and I will occasionally read "I hate CDKL5", "CDKL5 has stolen my child", "**** CDKL5".  I have never wanted to let myself feel that way.  I wanted to always be indifferent, to not take anything CDKL5 has to offer as a personal punishment, to always try and see the good it brings.  I prefer to be as positive and optimistic as possible, but it's tough, and it sucks to have to be Mary Sunshine 24/7.  You know what?!  I HATE that Sonya has CDKL5.  I HATE that I have to appreciate the small stuff.  And I HATE that our support group is growing and there is NO CURE!!!

So after a  much needed day of "me time" yesterday; I wallowed briefly in self pity, went to sleep, got up, and will continue spreading awareness of CDKL5 until some billionaire/entertainer/politician adopts this cause and helps ensure WE FIND A CURE!! 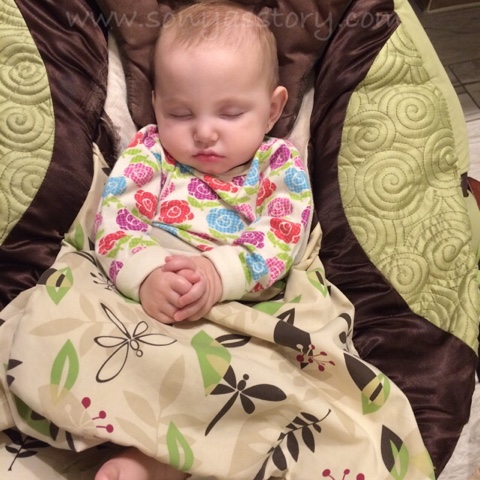