Last week one of the organizations we are part of sent out an e-mail about Legoland and Sealife aquarium tickets for yesterday.  I mentioned to Sam about it and asked him if it would be doable with our son's hockey schedule.  He said it would be too close with the times, but he would take him on a date to the Coyote's game that was happening Tuesday and I could take the girls.  Since Wednesday's are one of the days I work we already have a babysitter in the house for our youngest.  Perfect.  Done.

When I registered the girls and myself I hovered over Sonzee's name, debating in my mind whether I should bring her as well.  After all, it was a girls date.  Then my mind said, "Randi, she will hang out with nurse Karen, it is a big girls date."  I still felt a little bit of guilt, but that spot that resides in the bottom of my stomach during situations like this knew it was best for her to stay at home.  It is where she is most comfortable, it is where she will enjoy herself, it is where she would rather be.  Right?  Am I making that up?  Are those actual facts?  I can rationalize anything, you are talking to the person who justifies her daily lattes by saying the milk counts as necessary proteins.  So am I just telling myself things to make myself feel better for not choosing to bring her?

As we went on the first ride together I was feeling confident with my decision.  The choice was shortly confirmed as the girls were running all around the play area, knowing Sonzee would just be sitting in her wheelchair breathing in an almost certain trip to the ER.  We went to see a 3D movie and I was silently patting myself on the back at this point for making this a big girl date.  While we were walking around the girls mentioned that it was a girls date so we were missing Sonzee, but I reassured them she was having fun at home and it was a big girls date. We then went over to the aquarium where the girls played in the touch tank and crawled into the glass bubble domes to stand up and look at the fish from different angles.  This was definitely a "mom win" in my book of decisions, surely Sonzee was having a much better time at home in her P-Pod.

To close out the evening we ate our dinner that we brought to the food court to make the date official, and the girls asked to go on the Merry-Go-Round.  That is when the unexpected punch came out of nowhere...or was it just waiting in hiding for the right moment?  The girls each picked a horse separated by one bunny eared horse in the middle.  It took one rotation for me to feel the whiplash. I wonder what made them not choose that horse and sandwich it in?  This picture doesn't do the reality justice, if you look closely you can see the ears at the back of Sonzee's older sister in the blue shirt; I took at least six pictures to try and catch the moment.  The big girls truly in the moment enjoying their date, the rare non-traditional horse sitting empty between them both.  The empty horse that should have had an occupant.  The empty horse that to others would just be another empty horse like every other unoccupied horse yet really holds a place for a sister that won't ever get to experience the big girl dates, the childhood joy of a merry-go-round, and what it is like to just be a kid.  The empty horse flashing me forward into an inevitable future physical reality and grounding me in the current factual but justified reality of what is best for her. 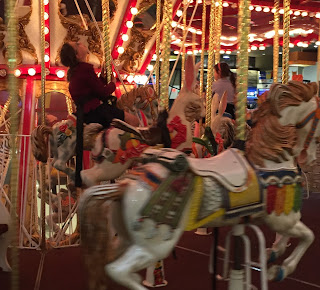